This wonderful post came from Dr. Hayes (you can read the original article here)

When the immune system works the way it supposed to, immune cells attack things that shouldn’t be in our system like viruses and bacteria. However, autoimmune diseases happen when your immune system starts to see healthy, normal cells in your body as foreign invaders and, in turn, attacks them. Your immune system may see cells in specific organs as foreign and sometimes manifest as rashes on the skin. This can also show up in the joints as redness and swelling. The common theme between all autoimmune diseases is inflammation. Some autoimmune diseases restrict themselves to certain organs (for example, Graves’ disease, which for the most part, is a disease that only attacks the thyroid). Other diseases like lupus can affect almost any part of the body.

How do autoimmune diseases happen?

We don’t completely understand why autoimmune diseases occur. Some people are genetically predisposed to these diseases. We do know that certain ethnic groups tend to get autoimmune diseases more often than others. It’s also possible that an outside influence like a virus may trigger the disease.

Where does dermatology fit into autoimmune diseases?

Below, I have listed some of the more common autoimmune diseases. The diseases that involve the skin are listed in bold. 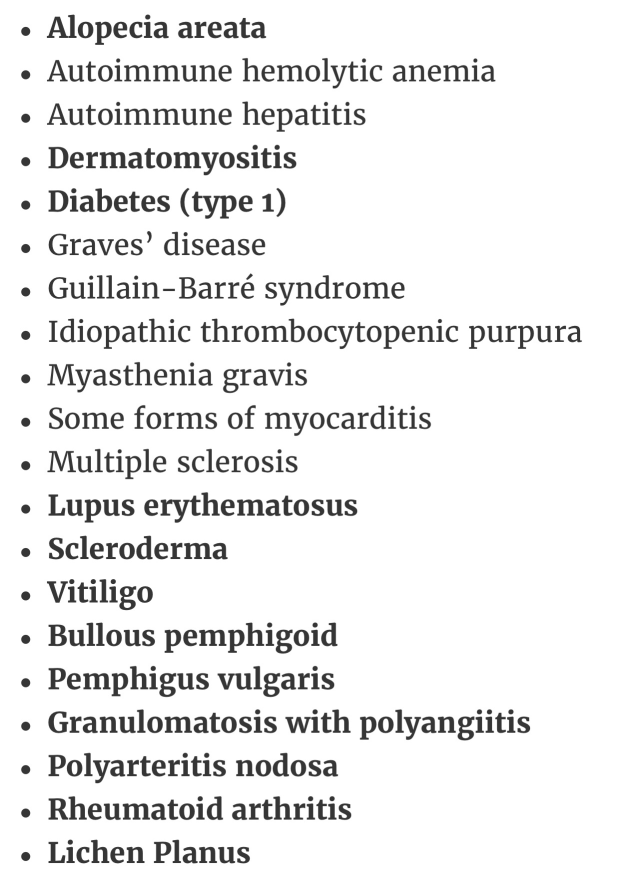 The most common autoimmune disease that I see involving the skin is lupus. Many people reading this article may know someone with lupus. One of the more common symptoms of lupus is a photosensitive skin rash. This means that when a person with lupus goes out into the sun, they feel sick or develop a rash. The rash most commonly seen with systemic lupus is the “malar” (butterfly) rash that covers the cheeks and nose.

The sun can trigger a flare-up of the disease and the malar rash is a warning sign that the disease is active. The rash is important to recognize because, when lupus is untreated, it has the potential to cause damage to other organs such as the kidneys, lungs or heart. Systemic lupus can affect almost any organ. Other skin findings with systemic lupus are dilated blood vessels around the cuticles or ragged cuticles. Rashes can also occur on any area that is exposed to the sun. Skin problems may be one of the first symptoms of lupus, so sensitivity to sunlight is not something to take lightly.

One type of lupus called Subacute Cutaneous Lupus doesn’t typically have internal involvement. Instead, it just presents itself with sun-sensitive rashes.

How does a person know if they have the autoimmune disease lupus?

The diagnosis is made when a person meets a certain number of diagnostic criteria. One needs to have 4 of the following problems to be diagnosed with lupus:

7. Neurologic problems such as psychosis or seizures

For those that do have lupus, one of the most important practices to prevent flare-ups of the disease is meticulous sun protection. Sunscreen should be used on a daily basis that contains a physical
blocker like zinc.

One thought on “Autoimmune Disease & Your Skin”

At the Westlake Skin Spa, we address the aging process with a whole body wellness approach. We have developed treatments and products that are 100% natural, chemical and preservative free. The treatments yield dramatic results without skin tissue trauma, pain or recovery time. The all-natural products enhance the esthetic image while supporting skin and systemic wellness.

Our caring and comprehensive approach, expansive knowledge of cutting edge medical technologies, commitment to organic products, and arsenal of proprietary bio-medical methodologies make for a one-of-a-kind skin care experience. From your very first appointment, you’ll see for yourself what a difference comprehensive treatments using the highest quality of bio-medical products the industry has to offer truly makes.
No gimmicks – just real skin care.

Our estheticians hold additional licenses administered and regulated by the FDA as practitioners of the proprietary Cryostem™ Skin Therapy System. Each has been approved and trained by the DNA Health Institute, Cryogenic Division, as a Certified DNA Practitioner (C.D.P.)